In loving memory of their ISA

Out of sight and out of mind 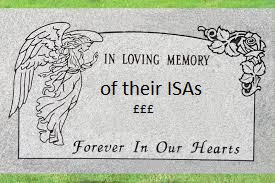 In the December 2014 Autumn Statement, Chancellor of the Exchequer George Osborne pulled a rabbit out of his dispatch box by explaining to the unsuspecting that if someone passes away they can’t pass on their potentially valuable Individual Savings Account (ISA) wrapper to their spouse, even if they have saved the money together. The remaining spouse could have benefited from the assets held in the ISA, but the tax-preferred ISA wrapper died with their spouse. Typically, HM Treasury estimated 150,000 people a year lost out on the tax advantages of their partner’s ISA when their partner passes away.

From 3 December 2014, if an ISA holder dies, they have been able to pass on their ISA benefits to their spouse or civil partner via an additional ISA allowance which has been in force since 6 April 2015. Importantly, the surviving spouse or civil partner is allowed to invest as much into their own ISA as their spouse used to have, in addition to their normal annual ISA limit (£20,000 at the time of writing).

Whilst hitting the headlines at the time, the later confirmed fine detail didn’t get the column inches in the press and it is worth recapping the criteria:

At the time, the Treasury’s red book suggested that the cost of this reform would be negligible in revenue terms; forecasting £10m in 2019/20. But, if people read this blog and are aware there is the potential to cost the Treasury a lot more, particularly if whilst both living full advantage has been taken of the seemingly ever-increasing ISA subscription limits.

Whilst the rules for this rabbit-out-of-the-hat refer exclusively to the preferred tax treatment of the ISA wrapper (no additional income or capital gains tax) there is clearly a potential knock-on to the subject of Inheritance Tax. Post-December 2014 it makes sense for wills to specifically leave ISA assets to surviving spouses in order to benefit from the spousal transfer exemption, thus potentially reducing the value of the overall chargeable estate.